Since Volkswagen took a stake in Škoda Auto the company has gone from strength to strength enjoying considerable international success and winning numerous design awards. 3Dconnexion 3D mice are used in the whole car development process and are considered a valuable component of the company’s engineering toolkit.

Only a few car manufacturers can boast an unbroken history of motor vehicle production spanning over 100 years. For the Czech car manufacturer Škoda Auto the journey began in 1895 when the mechanic Václav Laurin and the bookseller Václav Klement began designing and manufacturing bicycles. In 1899 Laurin and Klement started making motorcycles and in 1905 they moved onto cars. Over the years that followed Škoda Auto became the leading automotive manufacturer in the Czech Republic, yet the company enjoyed only limited success outside the domestic market. In 1989 they began to look for a partner whose experience and investment would help the company compete more effectively on the international stage.

In April 1991 Škoda Auto joined VW, Audi and SEAT as part of the Volkswagen Group. Since then Škoda Auto has transformed itself into a dynamic and flourishing international company with a strong manufacturing programme, entering markets of more than 100 countries. 90% of the company’s output is exported and Škoda Auto has a 7.5% share of the Czech Republic’s export market, making it an integral part of the country’s economy.

All Škoda cars are designed at the company’s design centre in Mladá Boleslav and the company prides itself on using the most cutting edge technology. In the R&D area, about 2,200 users work with 3D data from 3D CAD and modelling applications such as CATIA, Pro/ENGINEER, ICEM Surf, Maya, and RTT DeltaGen.

“3D mice are used in the whole Škoda car development process from styling to production. Our first experience with 3Dconnexion 3D mice was about ten years ago with the SpaceBall. In 2006 we carried out a strategic review of the installed base of CadMan and SpaceBall 3D controllers to evaluate the benefits of upgrading to the latest generation of the SpacePilot, SpaceExplorer and SpaceNavigator 3D mice. We were very impressed with how far the technology had developed. In the past 3D mice were ordered by individual departments but following the results of the review, we introduced central purchasing and decided to upgrade our 3Dconnexion 3D mice across all departments,” says Petr Rešl, head of process and system integration – product process at Škoda Auto.

“There were several product features and benefits that influenced our decision to start working with 3D mice. The main one being more precise model positioning than that offered by a traditional mouse. With a 3D mouse it’s possible to control the model in a way that’s impossible with a traditional mouse. You can move in all three dimensions simultaneously, panning, zooming and rotating without stopping to select commands, and by spreading the workload across both hands. Our engineers report increased comfort, which is important for long design sessions,” explains Jan Vesecký, CAD system specialist.

As a person responsible for 3D mice distribution at Škoda Auto Vesecký has found that many of the new engineers coming to work in the CAD design centre automatically ask for a 3Dconnexion 3D mouse as part of their CAD workstation because they have used them before, either during the studies or in their previous jobs.

“We are happy to accommodate the wishes of engineers who request a 3D mouse, as we believe that it offers numerous advantages. Engineers who have not worked with it before are given the chance to test the device for a couple of weeks. In most cases they request the device afterwards and often recommend it to other people in their department. Our experience is that people are surprised how much more they can achieve with their CAD software when using a 3D mouse,” says Rešl.

Integrating 3D mice has helped the team at Škoda Auto achieve a number of goals, including the improvement of quality of CAD work produced by the design department.

“3D mice help us to streamline the workflow and accelerate the design process. It is easier to access functions in the CAD software by utilising the 3D mouse function keys, so that we save time and money thanks to fewer mouse clicks. And, of course, there are ergonomic advantages, as it is a more natural and intuitive way to interact with a 3D content. As a result, our engineers experience less physical fatigue and discomfort,” explains Vesecký.

Since Volkswagen took a share in Škoda Auto in 1991 the company has gone from strength to strength with the brand enjoying considerable international success based on a reputation for value-for-money and quality. In 2006 Škoda Auto won the Best Overall entry in the PTC Awards Design Competition for its design of an automobile manual gearbox. The gearbox was designed using Pro/ENGINEER and 3Dconnexion 3D mice and was chosen from more than 100 entries submitted for the 2006 award.

“Our entry in the PTC Awards 2006 competition was a collaborative effort of a large group of engineers. The use of 3Dconnexion 3D mice de nitely helped us design a winning product. With 3Dconnexion 3D mice we work faster and more effectively. I can highly recommend 3D mice to any company that wants to get the most from their design engineers and CAD software,” concludes Rešl. Immersive Navigation of 3D Design in the world's leading CAD and 3D aplliactions. 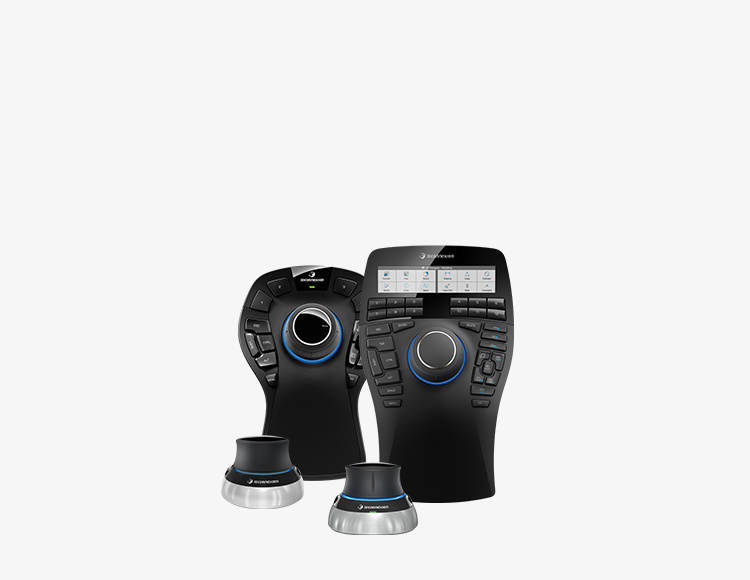